Our building was built in 1902 by Chauncey C. Bush (1831-1907) and it was located at 1449 Market Street in Redding. It served home to the Redding Post Office, Harry O. Cummins Chevrolet Car Agency, J.C. Penney’s, C.B. Singleton Women’s Wear, Burke’s Dress Shop, J.J. LeFebvre & Son Hardware, Redding Hardware (proprietor Jimmy Fox), Graphic Emporium (proprietor Freddie Papineau) and finally Shasta Historical Society, in 1998, when we moved from the Redding Museum of Art And History building in Caldwell Park to this location. Historic name of building: brick commercial, common name: commercial. The first photograph (top) is a post card showing L-R: the Shasta Historical Society building and the Bank Of Shasta County building in 1913. The bank at that time was called the Redding National Bank. The second photograph (below) is a store front view of LeFebvre Hardware in Redding, circa 1950s. 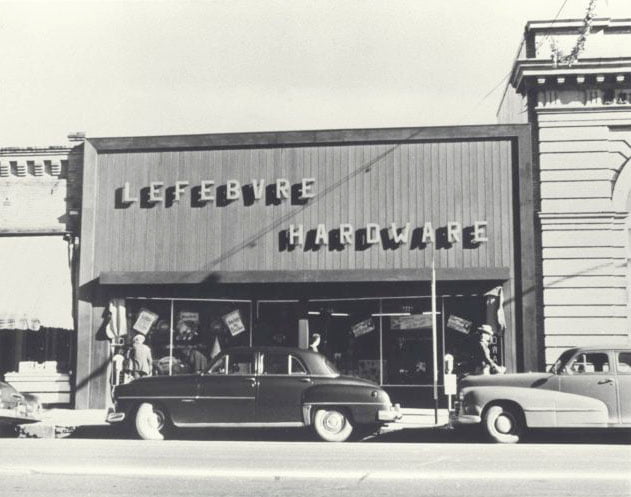 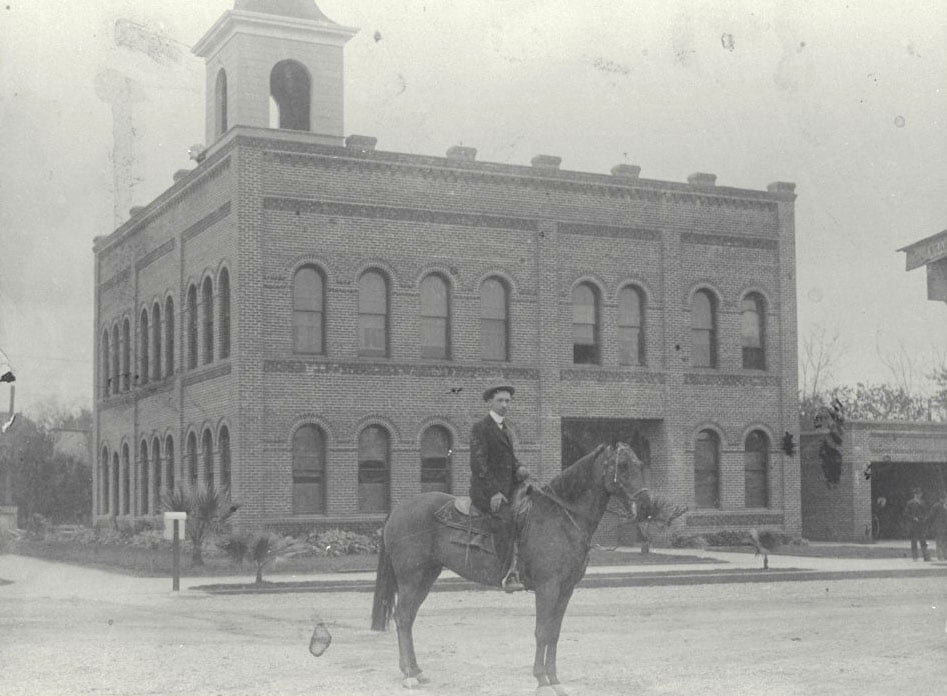 Old City Hall was built in 1907 at 1313 Market Street in downtown Redding. The historic name of the building is: brick commercial style, and the common name of the building is: commercial. From 1907 to 1979 this building was occupied with city offices, and between 1984 to 1985 it occupied an art gallery. At the present time this building serves as a art gallery and included the honor of being on the National Register of Historic Places. The photograph of City Hall was taken between 1907-1908 the man on horseback is Justice of the Peace, Francis Carr.

The construction of the Lorenz Hotel started in “1901” as the date appears on the side of the building. The bricks in the building were supplied from the Holt and Gregg Company of Anderson. Its grand opening was celebrated on October 18, 1902; its owner was Mrs. Susan Lorenz (1844-1925). Historic name of building: brick commercial, common name: hotel. When it opened to the public this hotel had a total of 132 rooms. Bathrooms were eventually installed in every room of the building. This building is located at 1509 Yuba Street in downtown Redding, and it also provides housing for senior citizens by the Shasta Housing Development Corp. They have owned the building since 1995. This photograph below is from 1911 looking south-west in Redding. 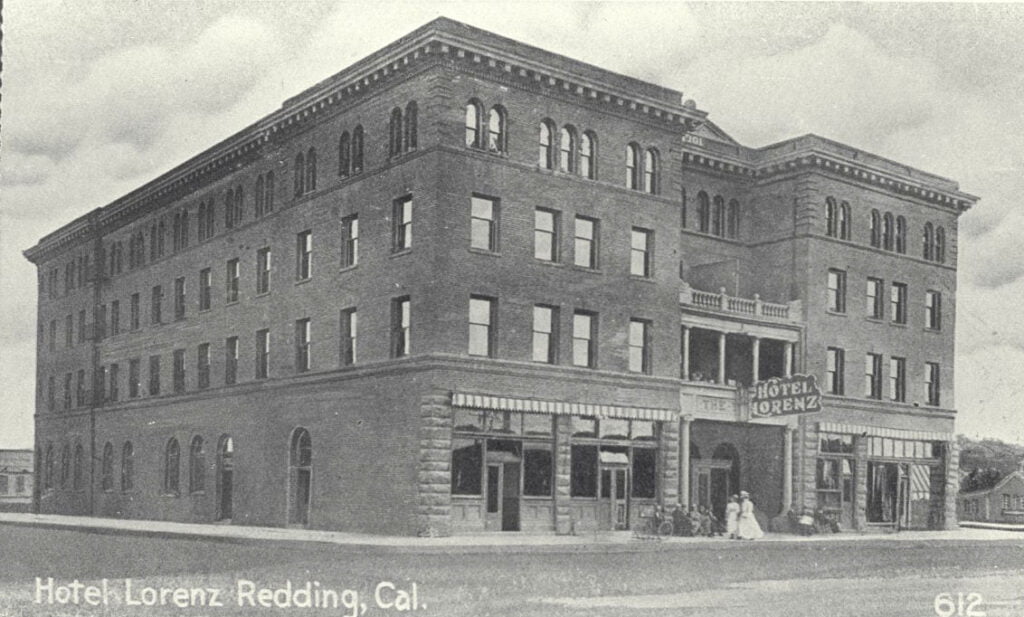 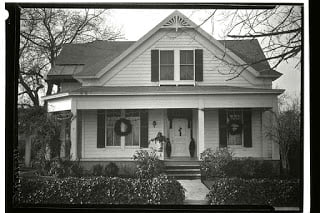 1520 West Street was built by John Varner Scott in 1895 and two years later it was purchased by Charles Behrens (1859-1917). Behrens was a Sheriff of Shasta County serving that position from 1898-1902. The Behrens-Eaton family has occupied the home since they moved into the house in 1898. The historic name of the building is: Queen Anne, and it’s common name is: Victorian Residence. The last descendant of Charles Behrens who lived and died in this historic residence was his grandson the late Superior Court Judge, Richard Behrens Eaton (1914-2003). After Judge Eaton died the home was turned into a museum as directed by the judge. The photograph below is circa 1930s in Redding. The house is decorated for Christmas in the photograph.

THE BANK OF SHASTA COUNTY

Originally, the Bank of Shasta County was established on California Street by Chauncey C. Bush (1831-1907) in 1884. In 1901 a new bank building was built at the corner of Market and Butte Streets in Redding. Bush worked in the bank as a manager. This building was built by the Holt and Gregg Company of Anderson. In 1908 the First Savings Bank was incorporated with the Bank of Shasta County and it was housed in the same building. The bank failed in 1910 due to a large loan worth nearly $200,000 to the Terry Lumber Company and another to the Castle Lake Lumber Company of $100,000. The Bank of Shasta County closed down on Saturday, March, 25, 1911. Then on Saturday, September 2, 1911 the Redding National Bank opened in the same building with the First Savings Bank of Shasta County and banking continued for local Redding residents. Years later, the Bank of Italy, which became Bank of America, purchased the Redding National Bank and branched out. Since that time additional businesses opened inside this building at 1459 Market Street. Historic name of building: brick commercial, common name: commercial. Both photographs below are from 1920. 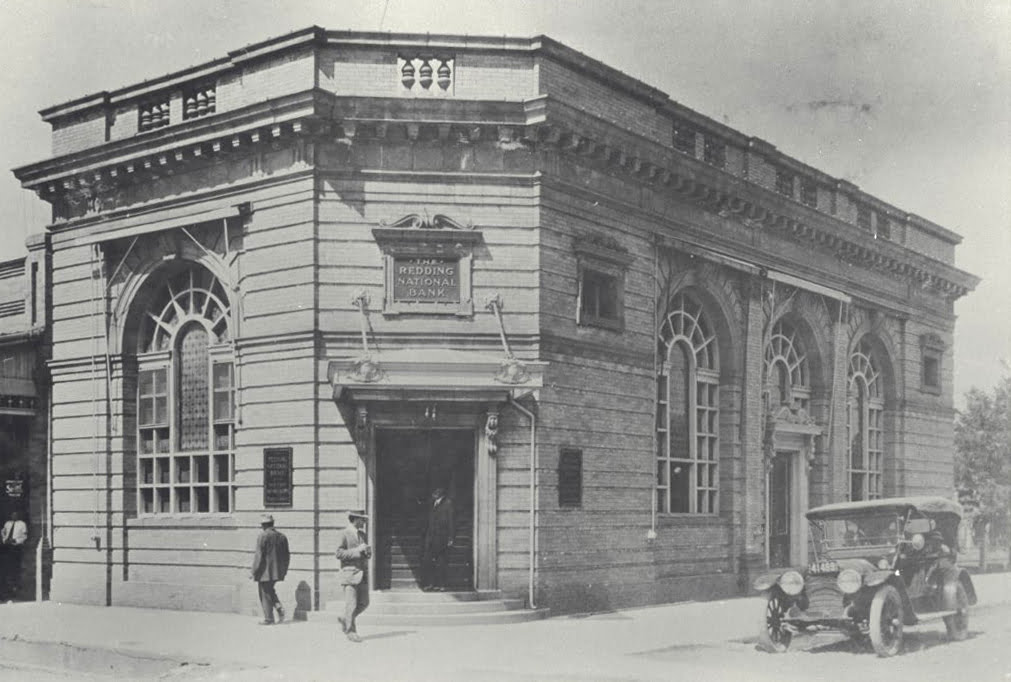 The Bell Rooms is a building which dates back to 1908 and is publicly owned and is scheduled for imminent demolition. To be replaced by an additional and unnecessary parking lot for RABA (Redding Area Bus Authority), based on the under use of the existing RABA parking lot. The Bell Rooms building was one of the few significant examples of the way downtown Redding appeared at the turn of the 20th century. Located near Redding’s former Chinatown of the late 19th century, and in a district known as the “Red Light” district. It was situated next to the railroad tracks and Shasta Street. Because of this location it placed the building in the middle of much activity associated with commerce and transportation.The building was constructed of red bricks by the Holt and Gregg Company of Anderson. Structurally determined sound, the building is still habitable. With the removal of the garage like structure to the south and the cinder block addition to the east it’s historic identity would be revealed. If the building is saved its future use could enhance our community in the form of a private enterprise such as a restaurant or a public space like Old City Hall. If you would like a bit of Redding’s fast disappearing historic culture preserved, please contact a Redding City Council person and/or the Shasta Historical Society. The historic Bell Rooms is shown in this circa 1930 photograph of Shasta Street looking east with a sign stating “Bell Rooms”. The building is on the opposite side of the tracks on the right side closest to the camera. 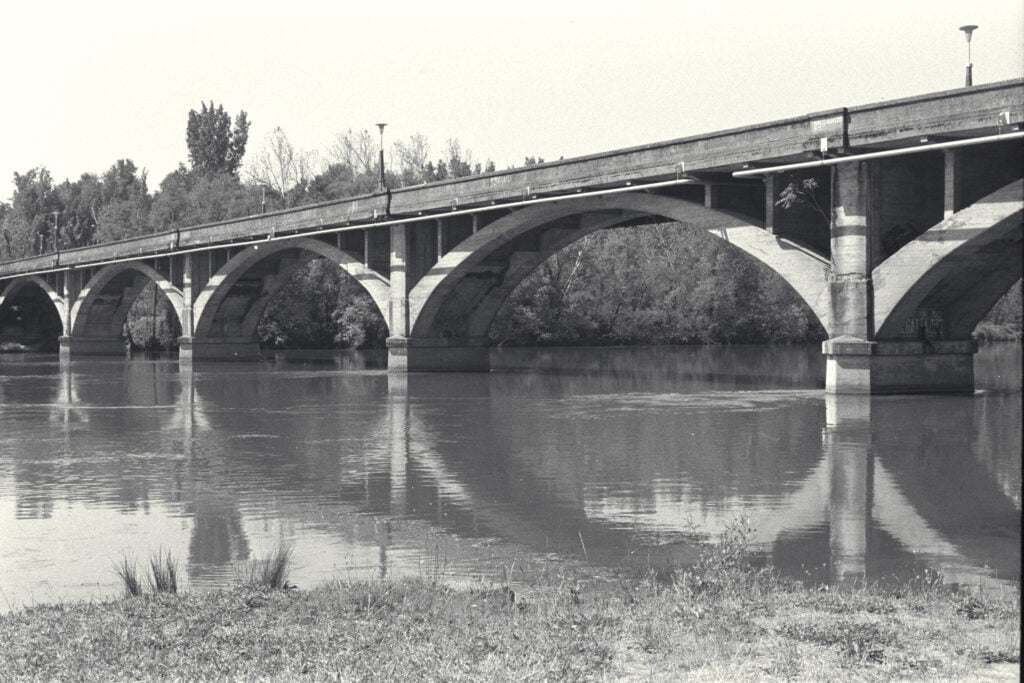