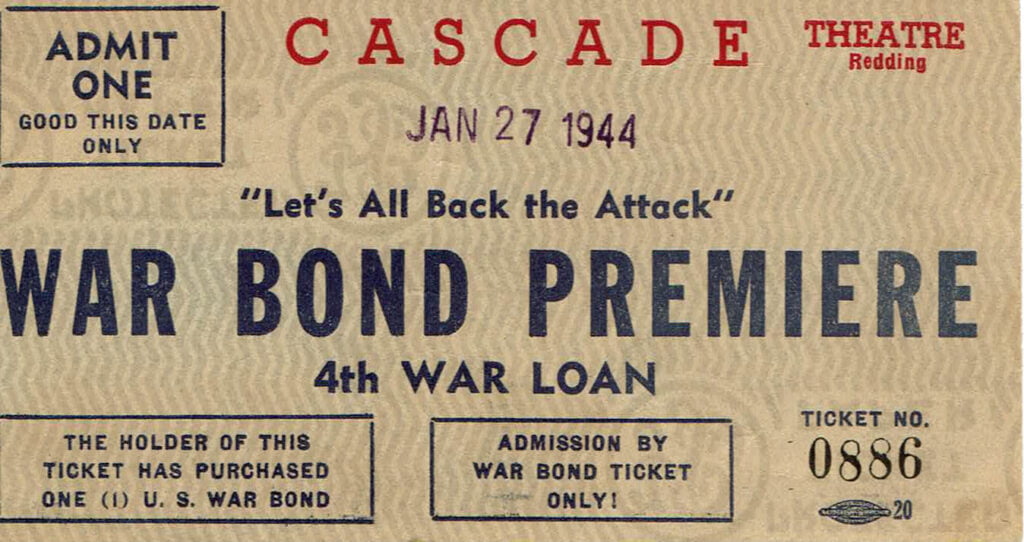 Prior to the first World War, the problem of other nations seemed remote to many people. But as WW1 began to take its toll, young men went off to fight, those at home held bond rallies, and women began meetings to roll bandages on behalf of the war effort. Although mining activity declined at the turn of the century, it was revived by the need for copper during World War One. The tradition of teaching the Armistice began in Redding each November 11th at 11 am at the old Golden Eagle Hotel.

Shasta Dam was one of a few water projects Shasta County had, and its purpose was to solve the problems caused by flooding in the valley, and to capitalize on the potential of hydroelectric power. The City of Redding website describes “proponents of Shasta Dam in the persons of Judge Francis C. Carr and John McColl lobbied for funds in Washington, D.C., in the early 1930s. The lobbying helped Shasta County community leaders work the Shasta Dam into the slowly developing State Water Plan with the Dam as the keystone of the plan’s Central Valley Project. Completed in September 1944, Shasta Dam took six years to build with its height being taller than the Washington Monument and its spillways three times the height of Niagara Falls.”

Even when the construction of Shasta Dam was completed, Redding continued to grow, in part because of the strength of the lumber industry, and also due to the tourism the new dam brought. Redding continued to grow steadily in the 1950s. Construction on the Whiskeytown and Keswick dams as part of the Trinity River Project created another economic boost and brought new workers to the area through the 1960s. And like with Shasta Dam, Whiskeytown Dam brought new tourism, and new recreational activities by way of Whiskeytown Lake. In 1962, the people of Shasta County voted to develop Whiskeytown as a National Recreation Area. Whiskeytown Dam was dedicated on October 14, 1963 by President John F. Kennedy, just weeks before his assassination in Texas. The construction of Whiskeytown Dam created the contrast level holding basin where the water from the Trinity River is siphoned underground to the Sacramento River as needed.

With the creation of Shasta and Whiskeytown Lakes, and the peripheral access that Redding has to Mt. Shasta, Lassen Peak and the Trinity Alps, Redding became a tourist center. The arrival of the railroad, expansion of air travel, the construction of Interstate-5, and development of improved communications helped bring people to Redding for recreational activities. During the 1970s, the unincorporated community of Enterprise east of the Sacramento River was annexed into Redding.

Starting in the 1970s, the lumber industry suffered from decline. Lumber mills in the area closed down and heavily impacted the Redding area. During the prolonged recession of the 1980s the forest products industry began to collapse. But this too passed because of a retail and housing boom in the late 1980s which continued until the 1990s.

The grand opening of the Sundial Bridge, designed by the world-renowned architectural designer Santiago Colatrava of Spain, occurred on July 4, 2004. The Sundial Bridge is a pedestrian and cycling bridge over the Sacramento River, connects the Turtle Bay Exploration Park to an arboretum and park, and opens up numerous hiking trails along the river. It cost $23.5 million to construct. But more than that, it has become the most iconic landmark of Redding, and continues to draw people to the area today. 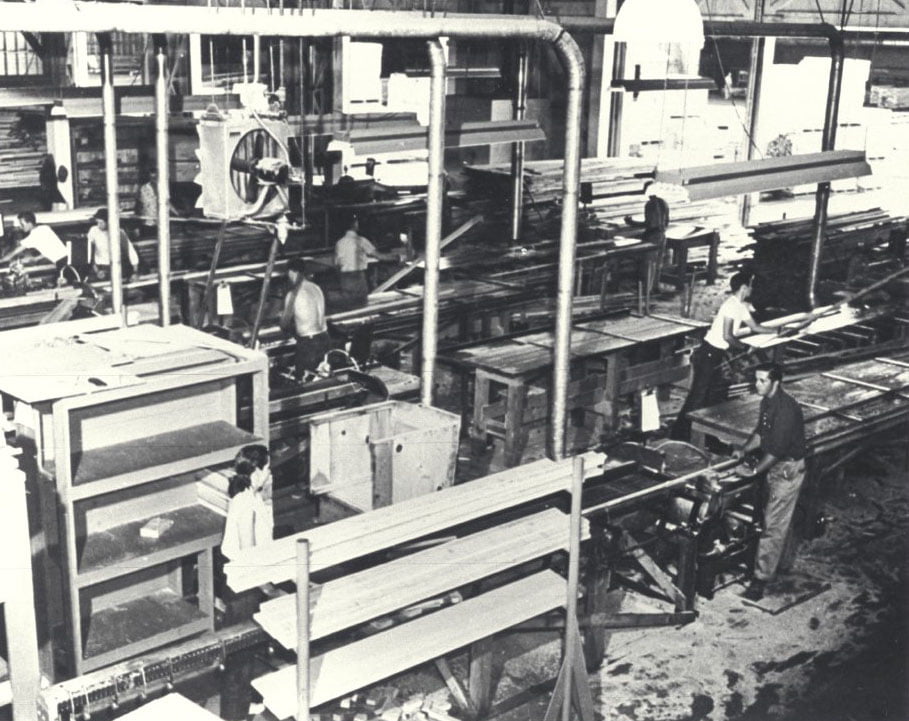 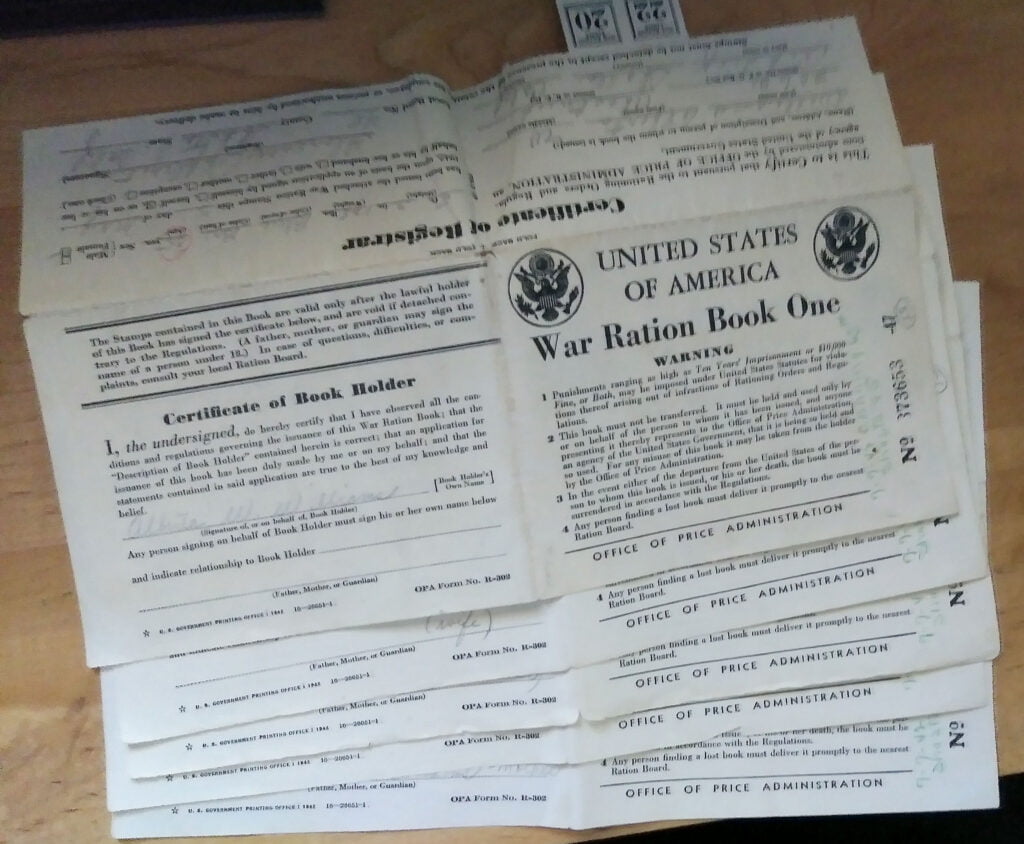 Shasta County’s history is not solely economic or recreational; the history of the Native American tribes in Shasta County is a long and often heartbreaking and bloody one, marked by armed conflict and exploitation, and did not end with the Gold Rush.

The Bureau of Indian Affairs (BIA) purchased the Redding Rancheria in 1922 for the purpose of providing homeless Native Americans a place to live. The Rancheria housed Pit River, Wintu, and Yana people. The Redding Rancheria website on their tribal history describes that “although the Bureau of Indian Affairs was obligated to establish and maintain a domestic water system, provide a road and housing, they built only a handful of substandard houses and failed to fulfill the other obligations. The history of the treatment of Indians in California is tragic. As recently as 1958, the California Rancheria Act expressed Congress’ intent to eradicate the cultural identity of Indians. In the area of termination, Congress unilaterally extinguished the special status and rights of tribes.”

The Carr and Camp Fires

Climate change has shaped Shasta County in a myriad of ways, with the immediate impact coming from natural disasters which continue to grow more powerful. In recent history, Shasta County has been affected by devastating droughts and fires.

Shasta County has always been susceptible to fires, but had not been quite so environmentally and psychologically scarred as when the Camp and Carr Fires ran their course. The Carr Fire began on July 23, 2018 with a mechanical failure of a vehicle and trailer. The fire became a major event for those living in the area and the surrounding communities. Over a thousand homes and structures were destroyed and eight people died. The Camp Fire started on November 8th, 2018 in Camp Creek Road by a faulty electric transmission line and raged for seventeen days. It covered almost 240 square miles and almost completely destroyed Paradise and Concow. The Pacific Gas and Electric Company, the utility company responsible for the faulty power line, filed for bankruptcy. To prevent it, the utility made a settlement offer which covered the four devastating fires caused by the utility, and pled guilty on 84 counts of involuntary manslaughter. Recovery efforts for our community are ongoing.

The history of Shasta County is a complicated and important story to tell and the best storytellers are the accounts left behind by our predecessors and the people who live here today. We hope you will join us in the endeavor to achieve our goals and keep this history alive.