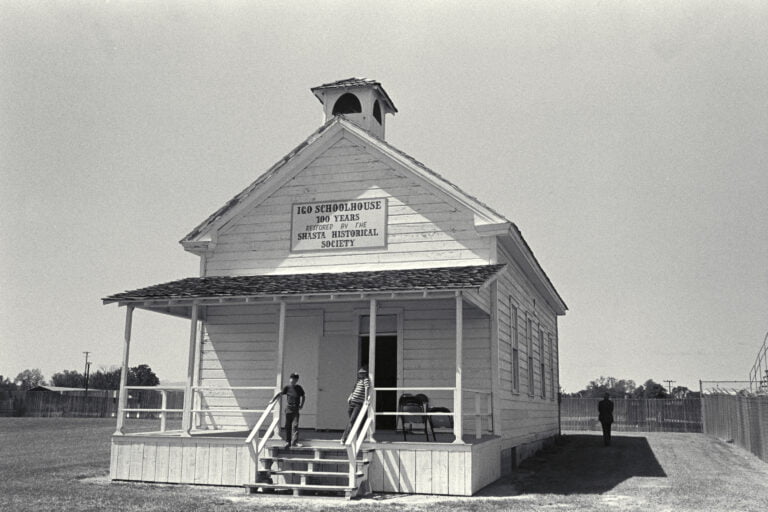 The Igo Schoolhouse at the Anderson Fairgrounds is open every day during the Shasta District Fair for visitors from 12:00pm – 7:00pm

The Igo Schoolhouse, now located on the fairgrounds in Anderson, was built in or around 1872, by Charles Kingsbury. It operated in Igo as a school for nearly a century and several generations of students. For many years the school functioned without running water, indoor plumbing, or electricity. Electricity finally came to Igo, and the schoolhouse, in 1941. Even though it now had electricity the schoolhouse was always heated with a wood stove. Running water was added sometime in the 1950s, prior to that water was carried in a bucket to the building by a trustee of the school who was paid $1/month for their services. Restrooms were located in a separate building. When a second teacher was hired around 1960 a partition was erected down the middle of the room.

Though class sizes varied, a minimum of six students were required to enroll to operate the school. Some years there were as many as fifty-two students in the one room schoolhouse, while other years the school did not meet the minimum enrollment necessary to open.

Schoolhouses were generally built within walkable distances for children and were staffed by teachers, who were usually very young and often resided with a host family in the community. Teachers typically stayed only a year or two at a school, though many teachers had trouble lasting even a full year. One year it took three teachers to finish the school year in Igo. Records of some of the teachers who taught at the Igo school remain, some of whose tenure were more notable than others. When Mrs. Kingsbury (wife of Charles Kingsbury) ran the school in 1903, funds ran out part way through the school year and the school closed early in March. Mrs. Kingsbury was later thought to have burned school records in frustration after being asked to leave. When Mrs. Jones began to teach at Igo in 1918 school did not start until January because lack of minimum enrollment numbers. Mrs. Jones became an oddity among Shasta County’s early school teachers staying there for twenty-five years.

In 1910 fire in Igo destroyed a hotel, store, blacksmith shop, and a residence. Fortunately the wind was blowing away from the schoolhouse and the building was spared. Very few changes had been made to the school from when it was closed in 1970. The Shasta Historical Society moved the schoolhouse from Igo to the fairgrounds and it is one of few remaining examples of a schoolhouse from the 19th century.