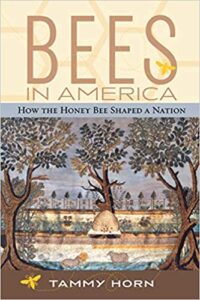 Honey bees―and the qualities associated with them―have quietly influenced American values for four centuries. During every major period in the country’s history, bees and beekeepers have represented order and stability in a country without a national religion, political party, or language. Bees in America is an enlightening cultural history of bees and beekeeping in the United States. Tammy Horn, herself a beekeeper, offers a varied social and technological history from the colonial period, when the British first introduced bees to the New World, to the present, when bees are being used by the American military to detect bombs. Early European colonists introduced bees to the New World as part of an agrarian philosophy borrowed from the Greeks and Romans. Their legacy was intended to provide sustenance and a livelihood for immigrants in search of new opportunities, and the honey bee became a sign of colonization, alerting Native Americans to settlers’ westward advance. Colonists imagined their own endeavors in terms of bees’ hallmark traits of industry and thrift and the image of the busy and growing hive soon shaped American ideals about work, family, community, and leisure. The image of the hive continued to be popular in the eighteenth century, symbolizing a society working together for the common good and reflecting Enlightenment principles of order and balance. Less than a half-century later, Mormons settling Utah (where the bee is the state symbol) adopted the hive as a metaphor for their protected and close-knit culture that revolved around industry, harmony, frugality, and cooperation. In the Great Depression, beehives provided food and bartering goods for many farm families, and during World War II, the War Food Administration urged beekeepers to conserve every ounce of beeswax their bees provided, as more than a million pounds a year were being used in the manufacture of war products ranging from waterproofing products to tape. The bee remains a bellwether in modern America. Like so many other insects and animals, the bee population was decimated by the growing use of chemical pesticides in the 1970s. Nevertheless, beekeeping has experienced a revival as natural products containing honey and beeswax have increased the visibility and desirability of the honey bee. Still a powerful representation of success, the industrious honey bee continues to serve both as a source of income and a metaphor for globalization as America emerges as a leader in the Information Age.